Learning at Home and in Nature

Learning at Home and in Nature

President Theodore Roosevelt received most of his childhood education at home. He learned from his father and mother. He also learned from his aunt and grandmother who lived with his family in New York City. Their lessons equipped him with knowledge, values, and habits that would guide his life.

Young Theodore’s parents gave him and his siblings opportunities to experience the outdoors. Their family took wonderful field trips and vacations. They spent summers in the country, roaming, exploring, riding horses, and climbing trees. The children went barefoot much of the time. They watched the haying and harvesting, picked apples, hunted frogs and woodchucks, and gathered nuts to sell to their parents.

In the country, the children had all kinds of pets—cats, dogs, rabbits, a raccoon, and a Shetland pony. Theodore loved these extended vacations so much that he felt eager to go when spring came and sad when the family moved back to town in the late fall.

While he was a student at Harvard, Theodore made two trips to Maine with friends and a local guide named Bill Sewall. Mr. Sewall told his family later that Theodore would take his Bible each day and go alone to a certain place in the woods. There he communed with God and admired the wonder and beauty of the natural world. (Now known as Bible Point, the location is a Maine State Historic Site.)

Theodore Roosevelt spent many years in public service. Elected vice president in 1900, he became president after the death of William McKinley in 1901. In 1903, President Roosevelt left Washington, D.C., for a nine-week journey across the United States by train, automobile, and horse. He traveled 14,000 miles, visiting twenty-five states, and speaking more than 250 times.

Celebrating the beauty and majesty of God’s Creation was an important part of his trip. Roosevelt spent two weeks camping at Yellowstone with naturalist John Burroughs. He also asked conservationist John Muir to give him a personal tour of Yosemite. 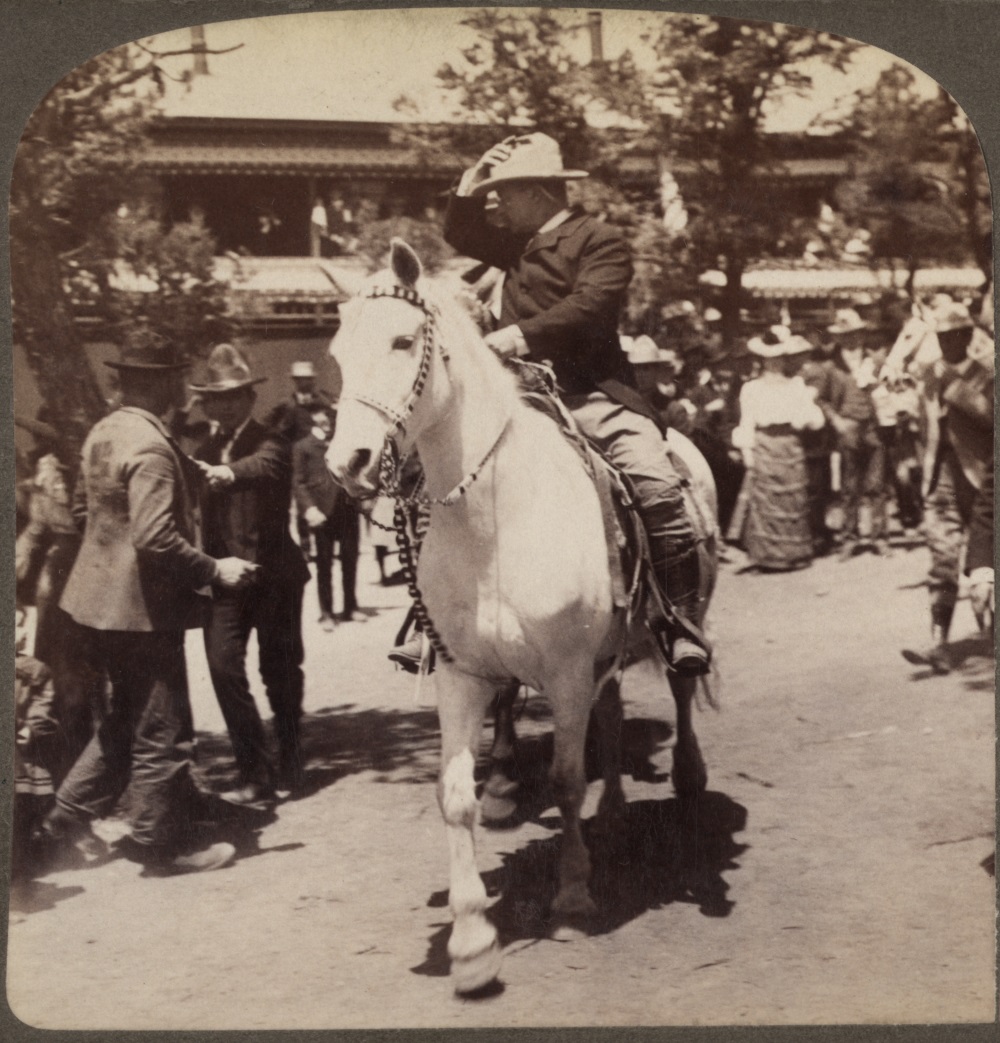 Roosevelt made his first visit to the Arizona Territory on this trip. He had served with soldiers from Arizona in the Spanish-American War, so he felt a connection to the area. His visit to the Grand Canyon made an impact on him, as he expressed in this speech while there:

In the Grand Canyon, Arizona has a natural wonder which, so far as I know, is in kind absolutely unparalleled throughout the rest of the world. I want to ask you to do one thing in connection with it in your own interest and in the interest of the country–to keep this great
wonder of nature as it now is. I was delighted to learn of the wisdom of the Santa Fe railroad people in deciding not to build their hotel on the brink of the canyon. I hope that you will not have a building of any kind, not a summer cottage, a hotel, or anything else, to mar the wonderful grandeur, the sublimity, the great loneliness and beauty of the canyon. Leave it as it is. You can not improve on it. The ages have been at work on it, and man can only mar it. What you can do is to keep it for your children, your children’s children, and for all who come after you, as one of the great sights which every American if he can travel at all should see.

We have gotten past the stage, my fellow-citizens, when we are to be pardoned if we treat any part of our country as something to be skinned for two or three years for the use of the present generation, whether it is the forest, the water, the scenery. Whatever it is, handle it so that your children’s children will get the benefit of it. If you deal with irrigation, apply it under circumstances that will make it of benefit, not to the speculator who hopes to get profit out of it for two or three years, but handle it so that it will be of use to the home-maker, to the man who comes to live here, and to have his children stay after him. Keep the forests in the same way. Preserve the forests by use; preserve them for the ranchman and the stockman, for the people of the Territory, for the people of the region round about. Preserve them for that use, but use them so that they will not be squandered, that they will not be wasted, so that they will be of benefit to the Arizona of 1953 as well as the Arizona of 1903.

President Roosevelt returned to Washington wanting even more to preserve America’s treasures. He made the Grand Canyon a national monument. While president, Roosevelt encouraged Congress to set aside land for five new national parks. He also set aside 150 national forests, fifty-one national bird reserves, four national wildlife preserves, and eighteen national monuments. Theodore Roosevelt was the conservationist president. In all, he helped to set aside 230 million acres for government protection.

According to Psalm 24:1, “The earth is the Lord’s, and all it contains, the world, and those who dwell in it” (NASB). As homeschoolers today, we can follow the example of Theodore Roosevelt’s parents. We can teach our children and grandchildren to take care of the world God made and the people he put in it.

Retrace President Roosevelt’s 1903 cross-country journey with photographs and summaries of his speeches: notgrass.com/tr1903

Charlene is a Christian and a veteran homeschooling mom. She is the wife of Ray, the most wonderful man in the world. Charlene has always loved being a mother and now relishes the role of mother-in-law and grandmother. She is proud of her grandma name, “Little.”

Dive straight into the feedback!Login below and you can start commenting using your own user instantly